Tog's Law of Commuting and you

Yesterday we looked Tesler’s Law of the Conservation of Complexity. For any system with a fixed set of capabilities, the amount of complexity is also fixed. The only remaining question is who takes on that complexity - users or developers.

When building web products, we now have far more flexibility over distributing complexity than ever before. We can choose to aggressively reduce the complexity of user tasks, but at the expense of taking on complexity in the system, and increasing development and maintenance costs.

It might seem like a no-brainer to minimise the complexity users have to take on if we’re able to. Even a small change in performance or usability can have a big impact when aggregated across many users.

So we might expect that the economics of this stand up. But there’s a fly in the ointment.

Way back in 1998, Bruce Tognazzini (or ‘Tog’ to everyone) identified a paradox with Tesler’s Law.

The problem is that users will seek to maintain existing levels of complexity, even if it doesn’t benefit them.

He calls this Tog’s Law of Commuting, based on the observation that an improvement in commuting times results in an increase in the average distance commuters live from the centre of a city, roughly preserving the average commuting time overall.

Tog had seen a similar phenomenon in software use, and you might have encountered this yourself. Once people get used to a certain level of complexity for any given task, they like to keep it at about the same level, according to Tog.

This presents us with a problem.

If we successfully reduce the complexity of completing a task for users, it’s possible that they will seek to increase it again to fill the ‘complexity gap’. This might express itself in different ways, but one way could be to demand more capabilities in the system.

And more overall complexity means that the system itself has to take on more complexity to achieve it, and that means higher overhead for development and maintenance.

To make this point, here’s an adaptation of Tog’s own visualisations: 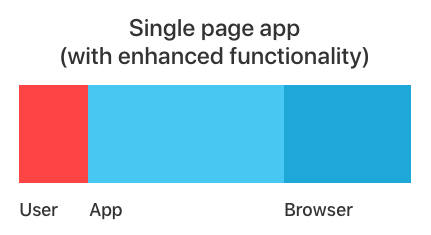 Although both these ‘laws’ have no basis in formal scientific evidence, and there’s no good way of quantifying ‘complexity’ here, they do ring true for me. I hadn’t before considered how making things easier for users might have some unanticipated side effects.